As I write this it is another day of sunshine that we enjoyed at the start of March. Spring is on the way. My early morning walks around the village are now full of bird song. The resident species are becoming more active. Lots of the male birds are singing to mark their territories and attract mates. As I leave the house on most mornings, I can hear a Song Thrush singing from the top of a tree at the end of our drive – a beautiful sound.

During the winter months the main interest of birds was survival, finding sufficient food and somewhere safe to roost each night. As the days grow longer the birds start getting ready for the next breeding season. Whilst a few weeks ago we may have seen a group of Blackbirds all feeding in close proximity, they now are territorial. It is not uncommon to see two males facing off to each other over a female. If one does not give way, they will grapple together until one gives up and moves away.

Whilst the Blackbird is primarily a sedentary bird in Britain, we do see in the Winter months an influx of migrating Blackbirds from Europe. These birds may come from as far away as Norway, Finland, Germany etc. Some may just be passing through to spend the Winter in a warmer place. Some do stay  in the UK for the Winter months.

Surprisingly in the UK the Blackbird went into long term decline up to the mid-1990s. We cannot be certain as the cause, but probably the removal of so many hedgerows reducing the number of suitable nesting sites and the increased use of pesticides reducing the availability of their invertebrate food were the main reasons. Since then, however, Blackbird numbers have increased. It is one of the most common breeding birds in the UK, with a population of over 5 million pairs. 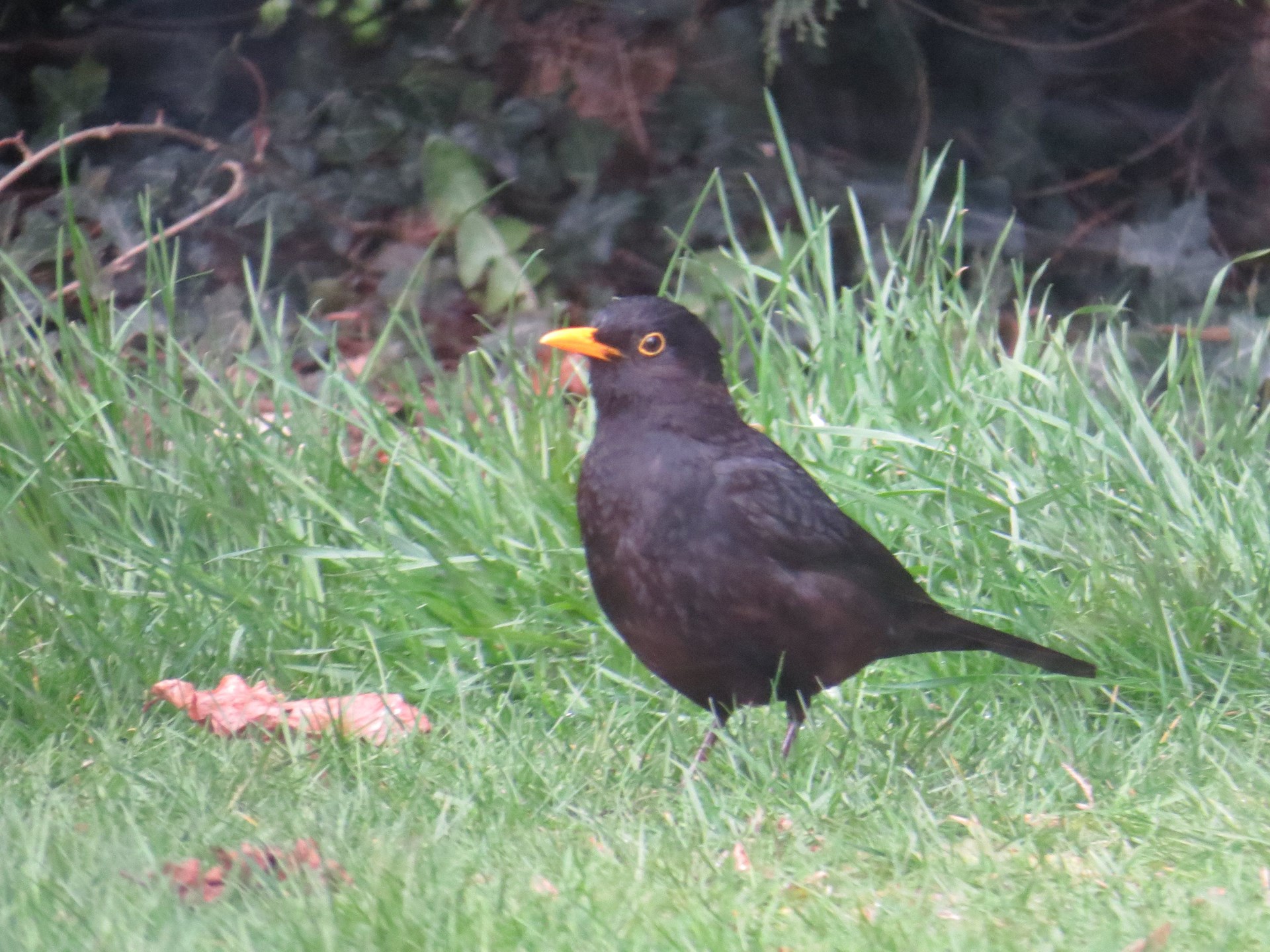 In the recent Atlas bird survey of the UK (covering the period 2007 to 2012), they were reported in 99% of all tetrads in Hampshire. The only areas they were missing from were those that had little dry land on them.

I have enjoyed taking part in each of these Atlas surveys. The country is divided into tetrads. Each tetrad is 2 kilometres by 2 kilometres square and the volunteer bird watchers undertaking the survey count all birds encountered in each two hour visit to the tetrad.

Hampshire is covered by 1029 such tetrads and for each one a bird watcher during the periods the Atlas survey were conducted over visited their squares to count the birds present. The first Atlas survey in the UK was done covering the period 1968 to 1972 – that was just for Summer breeding birds. Further Atlas surveys – which now include recording Winter bird numbers – have been completed several times giving us an excellent record of how bird populations have changed over the years.

The tetrad squares I covered were mostly farmland. So, I would contact the relevant landowner and ask for permission to walk across their land – it may not always have been possible to cover the tetrad using footpaths.

In a couple of cases where I had been unable to contact the farmer beforehand, they usually found me – a walker with a clipboard making notes and map case hanging around their necks invariably gets some attention and interest!

Each of the areas I did the surveys for were areas I thought I knew well. Despite that I still found bird species I was not expecting to see. It was an early lesson in how to find birds for me. A combination of not walking too fast, checking carefully any area, bush, tree etc that you pass and making sure you check everything that moves does generate some interesting results. Perhaps, at this point, best not to mention the canoodling couple I stumbled across late one evening, whilst checking a tetrad for owls!

And now turning our attention to owls I think a number of you have spotted one of our resident Barn Owls. There is often a Barn Owl hunting in the fields on the right just as you leave the village towards Upton. It regularly sits on one of the fence posts in front of the abandoned farm buildings.

Barn Owls are wonderful birds to observe – just watching them flying whilst they are hunting is mesmerising. In the UK there are something like 4,000 Barn Owl pairs. Not a huge number but they are widespread covering all of the UK except the most densely populated urban areas and the higher altitudes. Globally they are incredibly successful appearing in every continent except Antarctica!

It is the type of bird though that when you see one it is a notable moment. I can still recall the cold Winter’s day I saw my very first one, hunting along a ditch line in Cambridgeshire.

A number of villagers have stopped me whilst I have been out and about to tell me about our current resident Barn Owl – clearly all very excited by the sighting. Lets hope it stays for the Summer!

We are about to welcome back our first spring migrants. From about mid-March (i.e., by the time you are reading this) we should be hearing Chiffchaff singing to mark their arrival back in the UK. The male sits in the top of the tree singing ‘chiffchaff, chiffchaff’ for long periods. There are lots of them and they are fairly easy to hear but can be difficult to see. Once you can hear one scan the top of nearby trees and bushes, they usually sit just below the very tops. It’s a small green / brown bird. With a bit of practice, you will soon find one.

Following the arrival of the Chiffchaffs, Blackcaps soon follow. Their song is a beautiful melodic flowing song. They tend to sit more in the middle of a bush and then sing, quite loudly, for long periods. You can spend a long time looking for one, despite being able to hear it clearly and thinking it has got to be close by! 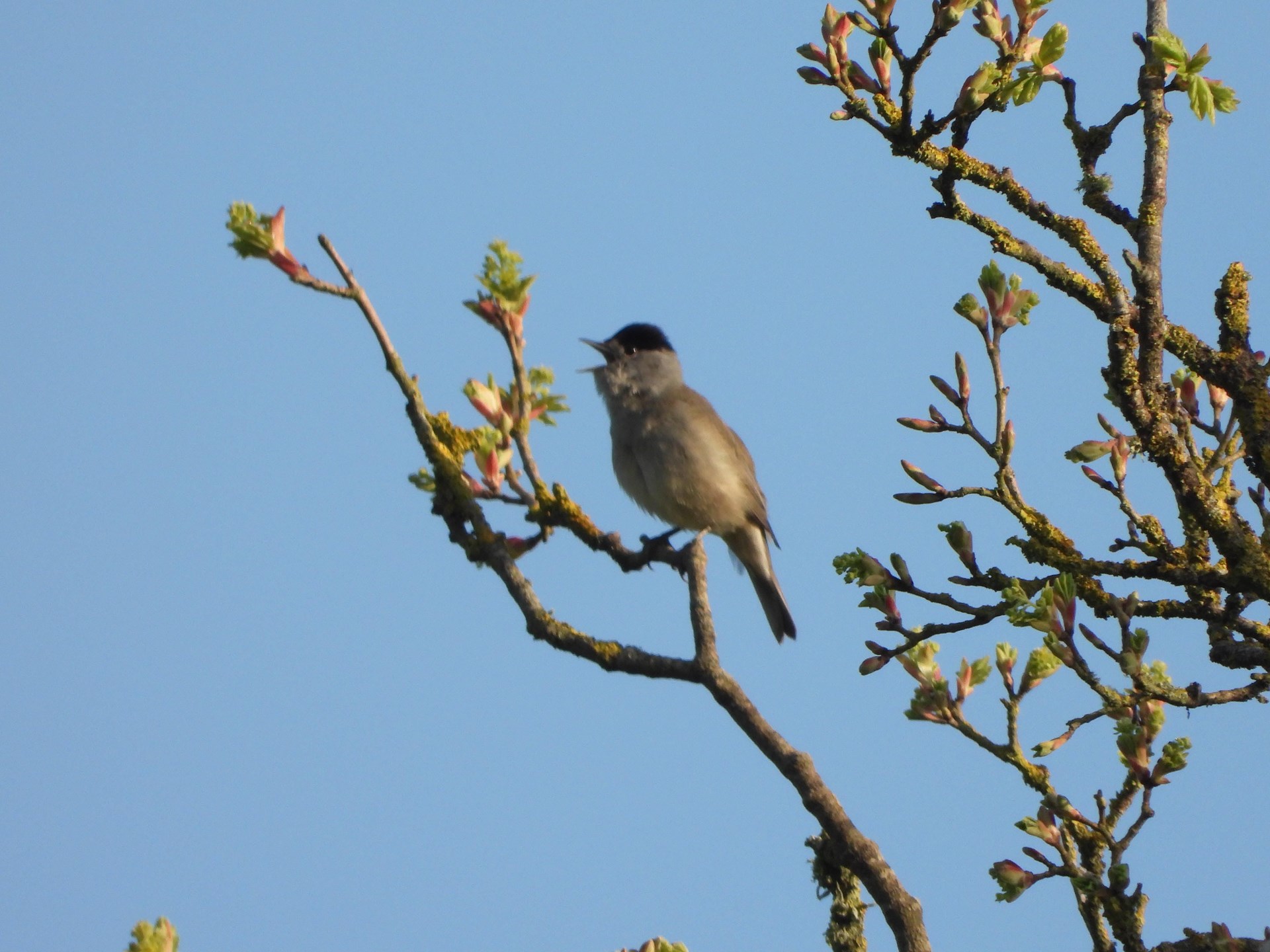 A male Blackcap singing from the top of a bush along the Hippenscombe Road. Males have a black cap, females a very pretty brown cap.

My book this month is ‘Mrs Moreau’s Warbler. How birds got their names’ by Stephen Moss. This book covers a range of bird names and where they originate. However, it’s worth reading just to find our who Mrs Moreau was and the story of how her doting husband named the bird in honour of his wife and his desire to see this elusive bird. It is found in Tanzania, Africa!